On Oct. 19, “True Vine” and “Kofu Gospel Club” were invited to hold a gospel concert in an autumn event at a home for the physically handicapped. There were 150 people including people in the home and their families. In the event, they had a barbecue first, so they were served more delicious beefs from a super famous shop. After a son of a certain famous singer sang, the club members performed. Many in the audience were moved to tears, saying, “My son sang songs with you.” “I was really moved because of your good songs. “I’d like to listen to your songs again.” They received an an encore. They will have another concert next month at the same home. We give thanks to the Lord! 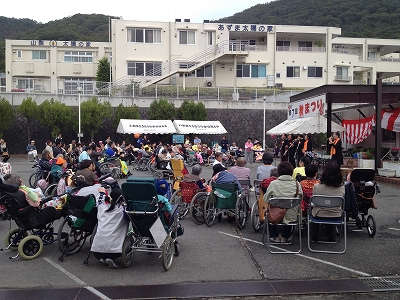