We included songs of the season such as “Akatonbo”, we moved our body with the song called “March of 365 steps”. We sang 12 gospel songs from the song book called “Yasuragi
no uta” “Sound of Wind” including songs users can enjoy together. As the concert going on more people gathered to the concert, one hour concert was blessed very much. After the concert, we heard ward of appreciation a lot. Some said “I want ask encore again”, and the concert became popular. 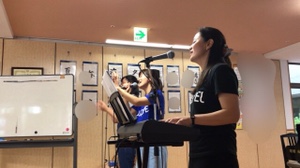